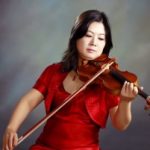 Mingen Zhou, violinist, currently the director of the string section of Shanghai Music Middle School affiliated to Shanghai Conservatory of Music,was born in Shanghai, China. She studied at the Shanghai Conservatory of Music, received her early training from Professor Zhao Ji Yang, Zhang Shi Xiang, Zhao Dan Qing and Zheng Shi Sheng, and completed her postgraduate studies at the Northern Royal Music Conservatory in Norway in 2003,under the full scholarship ,with Professor Malfred Hassen and Violinist Mr. Issac Schuldman. She has performed the <Butterfly Lover> violin concerto with Shanghai Youth Orchestra in Ningbo and Shanghai in 1995, and has given her solo recitals in Tromsø, Norway. She was the member of UBS Verbier Festival Orchestra in Switzerland in 2003 and 2004.

Mingen Zhou has also been involved in chamber music for many years , she is one of the founders of the “Resident Teachers String Quartet” of Shanghai Music Middle School in 2004,and often holds chamber music concerts , she has collaborated with many artists such as Chen Sa, Xu Zhong, Dong-Suk Kang.